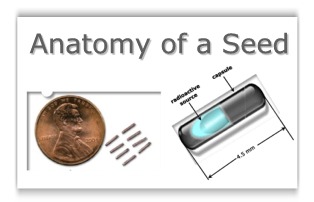 Most men with prostate cancer are choosing a radioactive brachytherapy: prostate seed implant for treatment due to its superior long-term results and lack of long-term side effects. Our own recently published studies have shown that with 10 years of follow-up, a brachytherapy: prostate seed implant is a very effective treatment for prostate cancer. If found early, more than 98% of our patients are cured of their cancer. Brachytherapy: prostate seed implantation is based upon the use of tiny radioactive seeds, each smaller than a grain of rice. The seeds are made of titanium and contain a small amount of either palladium or iodine. After placement, the seeds emit an intense amount of radiation to the cancer in the prostate, and only minimal radiation outside the prostate to other areas, such as the bladder and rectum. The seeds are permanently inactive after a few months. Cancer cells are much more sensitive to radiation than normal cells and can be selectively killed.

Brachytherapy: prostate seed implant is a simple outpatient procedure that takes less than 1 hour. Men typically report to the hospital in the morning, and return home a few hours later. The entire procedure is done through very thin needles while under a light general anesthetic. There is no cutting involved and no stitches are required. With an ultrasound in the rectum, a live picture of the prostate is obtained. The Urologist then precisely places the needles in the prostate, through the perineum (the area of skin between the scrotum and rectum). The Radiation Oncologist then inserts the seeds through the needles. Once the procedure is completed and the anesthesia has worn off, you can go home. Most men do not complain of pain and most do not need a catheter after the procedure. Unlike surgery, the risk of incontinence is less than 1%. Most men return to their normal activities the next day, and can return to work, playing golf, etc.

Most men experience only temporary side effects after the implant. Because there are no incisions or stitches required, there should only minimal discomfort after the procedure. The most common complaint is temporary irritation of the urinary stream lasting only for a few months. It is common to experience varying degrees of increased urinary urgency and frequency. Medications can be given to help alleviate these symptoms. Long term side effects after the brachytherapy: prostate seed implant are very uncommon. Unlike surgery, 99% of men are continent and completely able to control their urination. In addition, up to 90% of men treated with a brachytherapy: prostate seed implant can preserve their sexual potency (ability to have erections). By precisely placing the seeds in the prostate with the Procision™ technique, the incidence of seed migration outside the prostate is less than 1%. The likelihood of radiation causing any serious damage to any surrounding tissues outside the prostate is consequently minimal in our hands.

What is the Procision™ Brachytherapy: Prostate Seed Implant Technique?

Why is it so important? To have optimal results from your prostate brachytherapy: prostate seed implant, it is essential that all areas of the prostate are covered with seeds, and that no sensitive areas outside the prostate are implanted. Using the Procision™ Technique, there is minimal risk of placement of needles or seeds too close to the bladder, rectum, urethra or nerves. Any motion of the prostate or change in its size or shape during the procedure can be immediately taken into account, ensuring perfect seed placement. Because seeds are precisely placed in the prostate, the risk of seeds migrating outside the prostate is less than 0.4%. The Procision™ Technique differs greatly from the much older “pre-planned or Seattle technique.” The pre-plan technique involves mapping out the prostate a few weeks in advance by ultrasound. Then, when the patient goes to the operating room, the prior ultrasound is used to determine where to place the needles and seeds. The pre-plan technique unfortunately does NOT take into account any differences in the size, shape, or position of the prostate at the actual time of surgery. It has been our experience that the prostate can be very different at the time of surgery. Subtle changes in leg position, the degree of bladder filling, the use of anesthesia, and the shape of your prostate after the needles are inserted can have profound effects, making a pre-plan virtually useless. In contrast, using powerful computers and experience based on thousands of previous cases, the Procision™ Technique takes all of the above possible changes into effect. All of the needles and seeds are placed based on how the prostate looks at the time of the procedure, not how it looked weeks before. The doses of radiation to the various areas are calculated live, in Procision™. 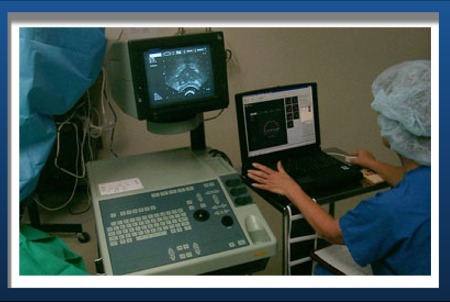 Our physicians have helped pioneer the use of powerful computers during the implant procedure to instantly calculate the dose of radiation received by the prostate and surrounding areas. The computer can obtain and analyze live images of the prostate gland throughout the implant procedure to further ensure optimal seed distribution and placement. This is a major improvement over older techniques where the amount of radiation received by the prostate could not be determined until after all the seeds were implanted.

For treatment to be effective in patients who have more aggressive or advanced stages of prostate cancer, it must be directed at both the prostate and the surrounding areas where cancer cells may have spread. To accomplish this, a brachytherapy: prostate seed implant is typically combined with a few weeks of IGRT (external radiation) and/or a temporary hormone blocking medicine.

Prostate cancer typically feeds on testosterone, the male hormone. A combination of a shot (Lupron or Zoladex) that you receive every few months from your Urologist, and pills (Flutamide or Casodex) that you take daily can temporarily block the testosterone in your body. By cutting off the “food supply” to the cancer, several helpful things can happen:

While hormone-blocking treatment alone will not permanently rid the body of the cancer, it has been shown to improve cure rates with radiation in men with more advanced stage cancer. It also has the ability to make the brachytherapy: prostate seed implant procedure possible in men with very large prostates that would have otherwise been technically too difficult to implant. When administered, men typically take the hormone blocking treatment for two to three months before beginning radiation, and continue the treatment until after the brachytherapy: prostate seed implant. Common side effects from the hormone blockers include temporary hot flashes, fatigue, and loss of libido.